As someone currently getting into the e-commerce game big time (actually, returning to it after a few years in between), I’ve been very glad to see a player like Fruugo come up on the scene.

There’s been a lot of brouhaha lately about the up-and-coming Social Shopping Search Engine (hey, their term not mine). An e-commerce aggregator, so to speak.

Granted, there’s lots of opportunity in localization (very costly and labor intensive though, and possible support nightmare), and tending to cross-border clients.

Scores of e-tailers should embrace the opportunity (personally, I hope they’ll expand the category selection dramatically though).

So, are they the next Amazon.com… or, are they throwing out the baby with the bathwater? (we’ll get to that…) 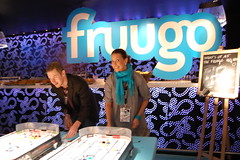 First, let’s have a few words about the user interface.

It’s clean and bright, and simple to use. Not exactly a lot of frills and thrills that you’d expect, and I hope it stays that way.

However, I think it might be even a little too simple. Take navigation for instance.

There’s a drop-down menu on the right, which will then open up the various categories with a couple of clicks. 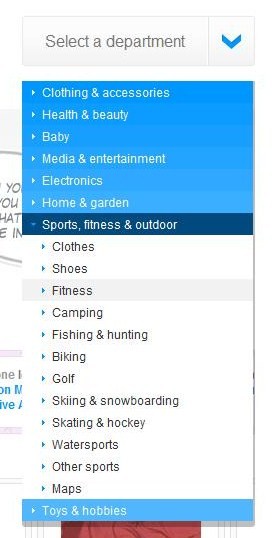 There’s a couple of things wrong with that though: I read from left to right, so the logical place for a place to start would be on the left, not right.

And the less clicks you need to get somewhere, the better. In other words, ditch the flashy drop-down and do a proper navigation bar with descriptive enough links that get you there directly.

There’s more, but I’m sure their usability team will iron these things out eventually.

What’s happening behind the scenes at Fruugo is more interesting, anyway.

One particularly interesting question is, how are they going to get the traffic they need to become as big as they intend to become?

Do they have a massive pan-European ad campaign planned? Piggyback on their partners’ traffic?

Another particularly interesting question is this: What about affiliates?

They’re already getting a commission from their own service, including fraud detection and first line support. So is there going to be enough margin for affiliates?

Because let’s face it, affiliates drive a LOT of traffic to e-commerce. Or associates, as Amazon.com calls them.

RunToShop is at least promising to reward customers for recommending merchants/products (not sure if that’s not a tainted relationship already – they do have a head of affiliate relations but there’s no mention of affiliates elsewhere).

Affiliate marketing is huge business, and a big part of e-commerce.
How will Fruugo deal with that?

How do they intend to trump Amazon? Affiliates are currently making a killing on Amazon directly through PPC so why would they bother with Fruugo anyway? (Okay, maybe euro-affiliates may have an edge here).

There’s plenty of room for a player like Fruugo, it’s just not very clear yet what they bring to the table for all.

Considering that fact, it would be in their interests to start talking more openly about what their goals are, especially since their success largely depends on masses of e-tailers and other players.

We have yet to see a newsletter, blog, anything really.

Hoping all the best for their newlyborn panda, and wishing to see it grow up very soon. 🙂

e-commerce ecommerce ekauppa fruugo social shopping verkkokauppa
Previous story :How to Create a Hypnotic Video
Next story :How to Get a Great Job (in ANY economy)

Links That Mattered In November 2013

Hey! Man, if you’re in the Northern Hemisphere.. and anywhere as north as I am.. November was one tough month to get through. The days are shorter than my attention span after a Michael Bay movie. That’s pretty short. 🙂 And still.. this month a lot of cool stuff found its way into my

How to Get A Super Affiliate to Promote for You? Here’s How

So, my friend! If you’re in the position of having a list, you have an audience, and a voice, and some semblance of success… You’re going to be approached for JV’s, affiliate promotions and product launches all the time. So here’s the 5-part formula for you: Make It Easy For Me Create

Why Failing Fast Is Not The Point

You know how success coaches and such tend to repeat the mantra: “If you want to succeed, double your rate of failure.” There IS a seed of truth in that, but it can easily derail you. I’ll explain. photo credit: Alex E. Proimos Failure is NOT the point. Failure can be a terrible te

So, I just came back from a ten day Australian working vacation type of thing. Took my 14 year old son with me, which was a surprisingly awesome choice. 🙂 Attended the two-day Superfast Business Live conference as well, hosted by James Schramko. I made a short video to give you the main takeaways

How to Create a Thriving Local Business From Scratch

Hey! Here’s a true gem I’d almost forgotten to publish. This is an interview of one of my local friends and heroes, Mikko Kemppe – the founder of a very well-known Salsa dance school. He spent a number of years all around the United States training with the Masters of Salsa, and wo

Why Apple Keeps Winning (The Hearts And Minds)

We’ve talked about why Apple’s product launches keep attracting the insane attention while their competitors struggle to fill a room and struggle for attention at trade fairs. Product launches are one thing, but I think amongst Steve Jobs’ usual hubris in yesterday’s iPad 2 a

Hi there friends, As far as I’m concerned, today is a Very Great Day. One of the reasons it’s great to be alive today is, there’s a wildly important ebook released into the wild today… Go For Your Goals – Goal Setting for Kids! FINALLY! A book for kids to learn not only

( During the writing of this post, the view count went from 35 million to 36 million. Will we be seeing 100 million+ views soon?! Read on… ) Well, well. We’re back in familiar territory, aren’t we? 😉 Remember the previous ‘how to create hypnotic videos’ in our series

Three Vital Rules For Every Single Consultant Or Coach

Okay, let’s go to town on the three things that matter in the service business, let’s call it consulting to keep things simple. 1. Charge what you’re worth. Really do it. You MUST charge what YOU will be happy with, because then YOU will go into the negotiations and the gig with a

Now listen to this: there is a very specific topic that’s very, VERY important if you want to maximize your results using direct response marketing… You can call it list selection, segmentation, audience wrangling… WHATEVER. It’s crucial. So let’s go, another copy rant

How to Sell in a Time of Panic (Tesla example)

Let me say just this as a prelude – I’ll write a separate article on how marketers should tackle this corona virus window in time – for their own and their clients’ benefit. Because THIS is no time to stand still. But right now – let’s just say this is also when b

Why You Should NOT Delay Your Product Launch

Now is the time to step on GAS with your product launch plans, NOT the brakes! I'll tell you exactly why...

Here’s an important topic to consider, especially when selling or writing copy to corporates. Sometimes you have to temper the instinct to go for the jugular… and give your prospects what they want and expect first. After that, the road may be considerably smoother. copywriting corporate

Did Apple Just Fire Their Copywriter?

I just got done watching the new iPhone 4S videos, pieces of the keynote, and the inevitable ads and such coming out of yesterday’s Apple event. And boy, is the difference stark or what. I bet nobody expected such a difference, even with Jobs out of the picture. It almost seemed like they were

Philanthropy – Food of The Gods

(Excerpt from made-for-tough-times ebook 40 Easy Ways to Create a Miracle) I don’t care how bad your situation is, especially financially speaking, properly applied philanthropy can reverse it all so fast you don’t know what happened. Literally. I’ve been through this scenario many

The Magic of Rightsizing Your Business

Something at once new and familiar seems to be invading my mind like a virus. Coming in from all sides, leaving little room for it to be ignored. What’s this insistence on figuring out scale? Doing something on a grander scale? Isn’t it enough to just serve others and do some good busine

Why RSS Still Matters in Marketing and in Life

Hey! If you haven’t been hiding under a rock, you couldn’t possibly miss the recent weeks’ hoopla about the impending demise of Google Reader. And the apparent doom it means for your blog traffic and more. Fear not, it probably won’t mean all THAT much for you, and I’ll

How to Avoid the Marketer’s Tactical Trap

You know how every marketer worth their salt likes to pin everything on the fine art of testing, right? The battle-cry of the seasoned marketer: “How do we know what ultimately works? We test, we test, we test!” That’s all fine and good, of course. Ultimately that is how you find w

Hey.  Time for another round of valuable tools, trends and resources from my Delicious streams of goodness and beauty. This past month yielded another very mixed bag of links, so go and see what grabs you. So rave on, will you… WP Profit Builder – a new landing page platform that’

Links That Mattered In February 2014

Hey! It’s again time to take a quick trip down my Delicious links from the past four weeks or so… These links may be new, new to me, useful to marketers, or just plain cool stuff to know. So go, pick & choose to your heart’s content, and leave a comment if I missed something