You know how success coaches and such tend to repeat the mantra:

“If you want to succeed, double your rate of failure.”

There IS a seed of truth in that, but it can easily derail you. I’ll explain. 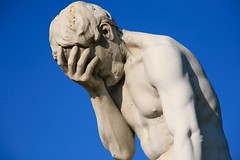 Failure is NOT the point. Failure can be a terrible teacher, unless you’re very careful, very lucky, and very AWAKE. For many people, failure can be crushing.

What then, IS the point?

The point is, if you’re engaged in an activity aimed at achieving something… whether you succeed or fail, at least it shows you’ve begun your journey!

If I were to ask you to point out the things you actually did and failed at, would you be able to do so?

This is often where there’s a blank stare as the respondent’s mind skips a few beats as they realize they just thought about doing it.

Did you REALLY put pen to paper creating a product, instead of just hashing out ideas for it?

Did you REALLY install that membership software and do your best creating a site, or did you stop at the thought of it?

Did you REALLY try to write that sales letter the best you can, or did you just discourage yourself from doing it?

It’s really strange but I’ve caught many clients in this predicament, and myself at times for sure as well. Progressively less so, though, fortunately.

Isn’t it strange how we sometimes trick ourselves to not risk failure just to preserve some modicum of self-respect?

The next time you need to start something unpleasant or something you feel you’re not good enough to do, not quite ready or so… do it anyway, not to fail fast but to enjoy stepping into the journey. The rest gets easier as you go along.

Previous story :The Productivity Trifecta
Next story :Yet Another Success Formula

Every Jerk Has A Past – And A Future

A lot of people trying to get into the Internet Marketing game find it very tough going. Not only is there a very steep learning curve, so many hats to wear, things to do… but more often than not, there’s a personal motivation – if not a pressing, urgent situation – that make

One Media Closes, Another Opens…

Hey! Some time ago I announced a new Facebook group about to be opened, on persuasion and whatnot. And I was very excited about it. Perhaps you were too, and applied to join the group. Well… what happened is a long story, but what it is, too many simultaneous plans ongoing turned out to be

The Fastest Way to Sell a Product Online Today

Hey you peeps of mine! If you follow the tech industry at all, I’m sure you’ve noticed the whole big “Real-Time” trend going on right now… The writing was on the wall a couple of years ago already, but now it’s the “IT” thing of the moment. So what doe

Hey! Here’s again what was new and/or cool this month in my Delicious bookmark feed. See if there’s something that tickles your fancy, and leave me a note if you found something great! Marketing Tools & Resources Ever Webinar – automated webinars finally come of age! Trycast &

Creating Video Fast And Easy In 2010

I vividly remember the first video calls I made over the internet with just my computer. It must have been late 2005 or so, and I was trying to hook up a video call between my brother and myself, using some bubblegum contraption that used Skype for connection, some third party program to hook up

Every now and then, I come across this curious phenomenon. Especially when talking to people wanting to start their online business, and make some serious cash with it. I don’t know what it is… but it seems increasingly people are wary of using the best online tools and by tools I mean s

Did you ever get a sudden spark of an idea, one you wanted to get out there as soon as possible? But after giving it so much as a few seconds to brew, you’re no longer sure what that idea is, fully formed: Is it a blog post? A broadcast email? A Facebook note? Just

There’s this concept in tennis I’ve found very useful in business, as well. In fact, if you’ve been with me a long time you may remember I once wrote a report called the Sweet Spot Report. 😉 Incidentally, it also carried some of the best copy I wrote in… 2008, I think. How

The Phantom of Writer’s Block: What It Really Is…

I LOVE to research. I LOVE to write. I LOVE to style and deliver the final piece. But I LOATHE… to start writing. That’s my cryptonite. And so it is for many writers out there who THINK they have writer’s block. I lot of people think they’re blocked but they just haven’t ST

So what’s different about social copy, if anything? I’ve had some excellent Social Copy workshops for private clients lately, more on this soon! Sparked a thought? Leave a comment below!

Three Technologies for the Corona Era

Without going into the somewhat exhausting nitty gritty of what it means to live and breathe in these somewhat scary (if you so choose) times… Let’s go directly into something that’s useful, for entrepreneurs and business owners. Three things I know personally are 100% awesome, nee

Cool And Useful Resources That Came Up Lately

Here’s what was important in my link collection in May 2014, give or take. Go and Enjoy! The Internet in Real Time – a pretty addictive view of what’s happening right now… Mary Meeker’s Latest Internet Trends Report – lots of big charts and stats and stuff… 🙂 Fa

Are You Split Testing Visual Hierarchy?

Hey! Do you know what Visual Hierarchy means? NO? Then press play and listen to this quick primer into the subject, using Amazon.com as an example. Yes again Amazon gets the honors, and there’s a good reason for that. See in the picture below how Amazon’s order form is currently changing…

So here’s another quick but important point for all entrepreneurs, solopreneurs, wannapreneurs… or even the seasoned biz owners who need that reminder on the fundamentals… as we all do. Press play… or let autoplay do the job. 😉 Sparked a thought or two? Leave a comment! Fo

Do You Have a Success Compass?

The unfortunate thing about being a frontrunner… is that you sometimes get derided for it. It goes with the territory, you know. Like when the movie The Secret came out three years ago, there was just all manner of attacks going around. Against the movie, against its message, against the very

Okay friends, here’s the second installment in this four-part video series. If you missed the backgrounder, you can read it here. The Three Pillars of Effortless Income, Part II Part Two deals with the mindset you need to have when you truly go for effortless income, as opposed to the usual, n

A little while ago I did a video about the Seven Cornerstones of An Effortless Lifestyle – and in it, I mentioned in passing that a balanced life MUST have three components in order to thrive and progress: Rest Activity Fun And a number of interesting conversations ensued. 🙂 So I’d li

I had some comments the other night about an old article about Commitment. It was one of those things – you get an inspiration in a second, write it out in five minutes, put it out there and rarely think about it. But sure enough, I’ve had a lot of comments about such articles and

Leave a comment Cancel
Comments to: Why Failing Fast Is Not The Point
Cancel reply