There used to be a top notch barista I used to visit every Saturday, like clockwork.

And when I say top notch, I mean actual prize winning #1 in the country and beyond.

I did like his espressos of course, it was part of a weekend routine I had along with a specific journaling method and a few other things.

So when Saturday rolled around, I’d put my Panama hat on and go visit this guy who was also in the habit of wearing a Panama hat, so we kinda bonded over that too. 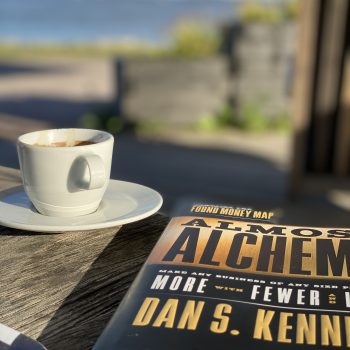 A good espresso and a solid book…
what else would you need for inspiration?

Anyway. What’s remarkable about this guy was he really, REALLY took his time making the espresso for me. To this day I’m not sure if he did it only for me and other connoisseurs, but daaaang.

It was not uncommon to see him brew a cup of espresso, take a quick sip, throw it away in (mock?) disgust.

Then he’d take his time adjusting temperature, the grind, even the spring water he used. In other words, he was committed to the highest quality and would not stop before he’d get there.

Most times, it would take three or four times before he’d come up with a satisfactory outcome and he’d finally hand it over and I’d lap it up with unspeakable glee. 🙂

A Top Barista Throws Four Espressos Down the Drain… What Do You Think a Top Copywriter Does?

Now, you may guess the reason I’m telling this story.

Typically, my new copywriting recruits have to go through basically the same exact thing!

I have my “copy cubs” write headline after headline, I rip them to pieces for lack of rhythm, say, and they start over.

They write a new lead, I point out the unnatural language, they start over.

They write a rushed close, I show them why it makes people drop off and throw it away. They start over.

Finally, they’ll end up with a piece of copy that truly does its persuasive job at first sight, because it’s been fine tuned seven ways till Sunday and it finally works the way it’s intended.

The same “top barista” treatment is necessary when you really, really want to become great at what you do.

Of course, nobody will force you to do this, it’s 100% up to you.
This is necessary ONLY if you’re really aiming to end up at the top of the ladder.

If pedestrian achievement is for you, then stop listening to me right away.

But if you have some fire in your belly still, keep on truckin’.

If that’s you and you’re okay with throwing four espressos down the drain to reach for that perfect one, perhaps you and I should have a talk. Maybe even consider a Copywriting Mentorship stint. At any rate, keep on sipping the good stuff, and writing the equally sharp stuff!

Previous story :Is Collaboration the Acid Test for Success?
Next story :The Secret Job Of The Copywriter

Hey! Well this one’s another one for the history books… New useful links, tools, articles, resources… all right smack dab in the middle of the coronavirus craziness that surely goes into the history books for a whole variety of reasons. Without further ado, here we go: Marketing &a

Howdy partner! Let’s get into something way overdue – and nothing if not exciting… Some two years ago I released a report called ‘The iPhone Opportunity’ in limited release – just before the first iPhone came out. If you read that report, you got the first taste o

This… is a topic very near and dear to my heart. Podcasting is one of my favorite ways to consume both information and entertainment, both for its portability and it not requiring my full attention. As I’m always thinking about a project, something I’m writing or… just thinki

Create a product in seven days (or less)

Hey folks, Here’s the fruit of an inspiration that hit me today while I was driving around in downtown Helsinki… so I just had to pull over and record this utterly important 2.5 minute quickie for you. Just press play below: So there it is. A product of your own, in seven days or less,

While my recent post about technology launches in internet marketing was met with some nods, agreement and whatnot… later on I felt only one half of the story got told. That’s not right. So here’s the other side of that sordid story. It reaches back into my past experience in the b

I don’t know about you, but I get a lot of ideas. TONS of them, on a daily basis. I used to be overwhelmed by them. Then I learned to jot them down. Then I learned to discern the most useful and potential filled ones. Finally… there is that eerie but all-important, “does it FEEL

Okay friends, here’s the second installment in this four-part video series. If you missed the backgrounder, you can read it here. The Three Pillars of Effortless Income, Part II Part Two deals with the mindset you need to have when you truly go for effortless income, as opposed to the usual, n

Don’t Let Your Business Wait For You To Catch Up

Hey there, I just wanted to share this quick two minute video from Rich Schefren, really hitting the big reason why guys like myself are in business – copywriters, and other experts serving a revenue-critical role online. Here it comes: As Rich so succintly puts it, well ok I’m paraphras

The Underpants Gnomes Theory Of Marketing

Lately, I’ve been noticing an unsettling trend in the Internet Marketing community. Many otherwise smart marketers have become enamored with the so-called Underpants Gnomes Theory Of Marketing. I know, it’s shocking, so we have no choice but to dig into this! The theory goes something li

The Time I Got Through to The Vatican

Hi! Here’s the story of how I got through to the Vatican at their most hectic time in modern history… Major takeaways: You can contact ANYONE in the world – celebrities, CEOs, heads of state… – barriers don’t exist when you know how Always TAILOR your message to t

Hey friends, If you’re on my mailing lists, you’ve probably already seen I recently published my first Amazon Kindle ebook. It’s a brainchild of my years of experience in the trenches of Conversion Optimization for e-commerce and online businesses of all kinds. So if you’re j

How to Write Copy That Converts… Even Unconsciously!

You know what… against my usual own advice, I’m not going to do a hard sell on this recording. Not this time. Because if this table of contents doesn’t convince you… you probably shouldn’t even be sold this recording. Sorry if that sounds a little harsh… it’

Is Collaboration the Acid Test for Success?

I was listening to a podcast the other day with Ryan Reynolds, explaining to Jason Bateman and Will Arnett the two of his most important secrets to his incredible levels of success. Of course, even he wasn’t always the entertainment juggernaut he now is, but plowing through mildly humorous bit

Just put out a video for you – this one’s about the gaping gap of opportunity between the huge publishing houses and the small, unknown, self-publishing writer. What happened to first music and then software in the last ten years, is now fast happening to books. And this time, the underd

“I’m Not Building a Personal Brand…”

Have you heard people say this out loud?  “I’m really not building a personal brand… yet…” Oh but yes you are! 🙂 By what you actually do By how you carry yourself By what you project into being By your opinions and stand taking (or lack thereof) By what you share (or don’t sh

Given Up On Your Dreams? Not So Fast!

It’s a terrible thing to waste, you know. Your honest, heartfelt, life-giving TRUE DREAMS, that is! photo credit: futureatlas.com Oh sure, your dreams can and usually do evolve over time and whatnot, that’s par for the course. But to ABANDON your dreams altogether… that’s jus

Leave a comment Cancel
Comments to: Four Espressos Down the Drain