A lot of people seem to have trouble succeeding life just because of one peculiar trait: doing things out of sequence!

That may seem weird, but I see it in business all the time. Especially with newly starting ambitious entrepreneurs who get a little all over the place… but no-one’s really immune to it.

It’s happened to me too: as an idea man and a creator by nature, I sometimes get lost in the idea phase, generating so many great ideas and then developing them… that I either never get to execution or I get bored with it.

Over time I’ve learned ways to deal with that, fortunately, but when helping other entrepreneurs this comes up ALL the time.

So if you’re a budding entrepreneur, or want to become one, now’s a time to pay attention and avoid some future snags.

Here’s a process I’ve devised to help fresh entrepreneurs – and anybody really – to avoid doing things out of sequence.

If you’re the kind of guy who walks around with a notepad or a voice recorder to get down all the ideas you generate throughout the day… then this part of the one to watch out for.

Brainstorming is great, but if you’re not careful you can lose yourself in there.

But what’s really important is that you do this FIRST, before you go into planning and doing and sinking your time into something you may not know if it has a snowball’s chance to begin with.

I see this all the time; people get one idea and rush to put it out there.

And don’t get me wrong, you SHOULD pounce on a great idea when you get one.

However, how do you know if it’s the BEST idea if you don’t generate a few more and then compare them?

So let your brainstorming phase run its due course, and when you finally feel it’s starting to dry up, move up to the next step… 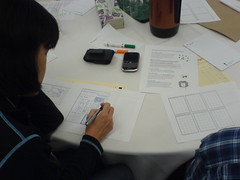 Next, now that you’ve got your ideas jotted down, it’s time to structure them properly.

Take a good, close look at them all, then start to categorise them according to whatever criteria is important to you.

It could be time to implement, time to revenue, degree of fun… anything that you actually use in your mind to understand what goes on in your market.

…but a documentation of what’s going on in your mind (or your team’s collective mind) right now, structured so you can start making sense of it.

A word of warning though: don’t get stuck in this phase, getting all academic and trying to fit your free-form thoughts into some preconceived boxes.

It’s just an exercise to make more sense out of your notes, to start finding the real meaning behind it all.

And when you’re done with that, it’s time to move on to… 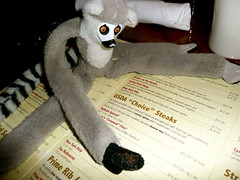 Now that you’ve got your notes down, and starting to see the forest for the trees, it’s time to…

Meaning, take a hard look at what you’ve documented, pick the ideas that hold the most promise on paper.

Put those on ANOTHER piece of paper, and edit and re-edit as you  inevitably come up with some changes doing so.

Then take a step back and REALLY look at them on that shiny new paper.

Look at each idea, now developed more fully than ever, and grade each of them with TWO markings:

2. How feasible the idea FEELS to you, based on pure intuition.

Then tally up the numbers, and see what are the top two entries.

…Then, what you do is simply pick one of the two and, most importantly:

Agree to do it.

You’ve gone through all this trouble, you now know that what you’ve got in front of you is both valuable and feasible… well worth your time.

So AGREE to the idea. Let it take hold of you, and agree to step onto a journey to see it from start to finish.

And now, FINALLY, you’re ready for… 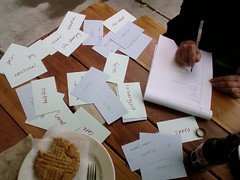 After creating a bona fide commitment in the previous step, now you’re well and truly ready for planning.

After you have a commitment in place that you cannot withdraw if you wanted to… planning flows of its own accord.

And not only planning, all kinds of support flows to you and you feel like everything is clicking…

After a while, you may even feel like you’re experiencing Good Luck!

See, it PAYS to do things in sequence!

Don’t make the mistake of discounting that feeling, by the way.

When you get to that free-flowing state and space, it’s time to press on and completely take your foot off the brakes.

However, even in this stage there’s something crucially important to keep in mind before you lose yourself in execution (and you SHOULD lose yourself there, that’s a GOOD thing by the way – your ego stays out of the way).

That is: Dispel your doubts by getting into planning early and doing it properly.

Don’t try to shortcut planning, you’ll only end up cutting yourself short.

You can do parts of planning even earlier in the process IF you can’t seem to get anywhere.

Just lay it out further and further until you can see what you needed to see about it. 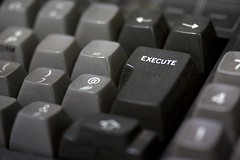 It took all those four steps before you actually jump into the execution phase.

Execution requires an article all of its own so I won’t get into it much here.

I’ll just say if you do the four preceding stages properly… you won’t HAVE to know much about execution!

Because you’ve gone through all the right stages and emotions, really triangulated and hunted down what it is that you’re doing.

That’s how you become the kind of person people look at and say:

“S/He knows what they’re doing. Let’s get close to him and help them out.

Who knows, maybe something rubs off on us while we do it, too…”

So make it a point to do everything in sequence, I promise you’ll not only get better results, but you’ll also enjoy the ride a WHOLE lot more!

Okay, three more little tricks that can really make a difference in your online marketing… especially when stacked. Let’s go! 1. Attract Attention & Action in Email with a Johnson Box Johnson boxes. I could make a ton of jokes but let’s keep it civil here. 🙂 So what’s

Hey! Another installment of new, useful or just plain cool resources from around the webs. I don’t know how long I’ll keep doing this free service for you, but enjoy while it’s there! So here you go, gifts from my keyboard. Cheers, Juho   Marketing & More Fro Knows Photo G

How my refreshing dip into a cold, cold sea relates to you taking some bold steps in your marketing… Well, just keep watching… 🙂 I may not post every one of my videos here so if you want to keep up, make sure you’ve subscribed to my YouTube channel! Or heck, even Vimeo if you

Hey there! You and I both know there is an overabundance of tools for any online entrepreneur to use. For every need, there seems to be a TON of choice, and the monthly consensus favorite is ever-changing. So I wanted to compile a modest list of tools that I consider to be of SLAM-DUNK caliber. Tha

A Fast (And Real) Way To Outrageous Profits

You hear it ALL the time, right? THIS product or THIS method is THE way to fast profits, fast cash, fast whatever. And yet, if we’re 100% completely honest, we all KNOW that it takes something truly unusual and truly unusually USEFUL to get that kind of a response from the marketplace. I don&#

Are You Making These Membership Site Mistakes?

A.k.a. The Three Deadly Turnoffs of Membership Sites So Hey! I’ve been a member of numerous membership sites over the years, and have run a few of them myself. For my own businesses and for clients alike. I recently took a look back at my experiences and found three things that can defini

Why Apple Keeps Winning (The Hearts And Minds)

We’ve talked about why Apple’s product launches keep attracting the insane attention while their competitors struggle to fill a room and struggle for attention at trade fairs. Product launches are one thing, but I think amongst Steve Jobs’ usual hubris in yesterday’s iPad 2 a

How to Choose Your Next Project

Like so many entrepreneurs, I face this insidious problem from time to time. With so many ideas and prospective projects floating around, which one could I possibly choose over others, and why? I’ve wrestled with this quite a bit over the years, and while there’s a lot to admire in the H

Entrepreneur Talk: Smack Behind Your Back

How to Dispel Copywriter’s Block

Yes, the dreaded Copywriter’s Block… why does it happen, and what do about it? I’ve coached dozens and dozens of my direct coaching students through this, here’s a couple of observations about it all… Do you ever experience writer’s block? Sound off below!

After some weeks of languishing, lazying about, swimming in lakes and oceans, and other assorted summer nonsense… it’s time to get back to business. Well, sort of. For a short moment, anyway. 🙂 In short: the Summer 2010 Edition of my PDF newsletter The Copyist is now ready for downloa

Let’s look at three surprising traits of truly successful copywriters (and all marketers really, let’s be honest). If you look at some of the newcomer, mostly junior copywriters around talking about their work you’d think the whole profession is all about just “being awesome”. Or a

The Return of Long Form Copy

So… everyone just LOOOVES to complain about long copy, right? “Nobody, I mean NOBODY has the time to read it” “Nobody cares to stop for that long during their busy day” “I’d fall asleep half way through if I tried, ha ha…” EXCEPT… When you

So it happened again. With most demanding projects, it happens at some point. I’d done all the research, put together all the pieces, the sales arguments, the benefits, the hooks and the most appealing approaches… But then I hit a snag. Couldn’t get started with the actual writing. After 15+ y

It’s now a week before the Oscars, so some movie talk is in order. I will be releasing my formula for picking an Oscar winner, but first… let’s get to the truth of the matter, so to speak. As elusive as it is to try and find ONE quality over others that makes a good

Good morning fellas. I just woke up to reading an excellent, excellent article I want to share with you. And it’s not even a brand new one, written over a month ago but it’s too good not to give it a quick nod. It’s called How To Start A Revolution by Jonathan Mead. I vividly

For a restart of this site. Details to follow… Thanks, Juho

Hey! Here’s another quickie podcast, prompted by a renewed website that forgot to cater to first-time visitors. See if you might have the same problem… Go on, do the exercise and see if you come clean! 🙂 See yah! -Juho conversion copywriting cro overhaul prospect relating usability we