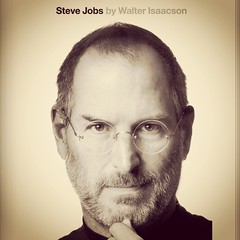 It took me about two weeks and I’m already missing the experience (UPDATE: the blog post sat for an additional 4 weeks…).

Talk about living vicariously through someone! Worth reading just for the lessons in persuasion, but that’s not why I’m writing about it today.

See, I’ve been somewhat irked by the some of the comments already made about the book, and I think some people are seriously misleading the genius of Steve Jobs.

I’ve seen blog posts such as ‘To be a better manager, be a jerk like Steve Jobs”, and more along those lines.

That’s understandable since the book devotes a good deal of real estate to describing how other people experienced being and working with Jobs. And invariably they did mention his personality as, well, not so easy to get along with.

However. Come ON! The last thing we need today is a bunch of deluded would-be mastermind mid-level micro managers demanding their assistants deliver their lattes JUST SO or there’s hell to pay.

Jobs may have had a difficult to understand personality for many, but I think that’s well beside the point. Let’s look a little deeper than the surface, and perhaps find something of value.

Every single human being is flawed. As was Jobs. But the other side of that coin is, it can also work to propel out the particular genius of the person.

So now, I’d like to offer a few key observations and takeaways from the Steve Jobs authorized biography right now.

Okay, I’ll admit it: I ran out of steam. I could talk about this book and these subjects all day long, but adding more to what you’ll already get by reading the book is tough. So take my word and read it. It’ll take a while, but the second half especially will be well worth the effort.

To sum up: whenever we come across a great, brilliant man (or woman), you can be sure they always embody a paradox of some kind.

In the case of Steve Jobs, apparently the paradox was his uncompromising love and sensitivity to beauty, elegance and excellence in creating technology that serves humanity the best… versus the way this same sensitivity came across as difficult behavior.

He didn’t mean it, but he also couldn’t help it, as he’s quoted as saying many times. Let’s leave it at that. May he rest in peace, and may Apple live on.

Juho Tunkelo Member since May 22, 2007
Loading + Follow Following
Long time marketing strategist, superstar skills in copywriting and conversion optimization. Ring me up on Skype or send me a free-form email and I’ll lend you a keen ear. https://www.juhotunkelo.com
Do you like Juho Tunkelo's articles? Follow on social!
Previous story :Don't Let Your Business Wait For You To Catch Up
Next story :The Smartest Use Of A Vanity App

The Secret Job Of The Copywriter

It is sometimes baffling to realize just how MUCH people misunderstand the job of the copywriter. (And to be 100% real here, the #1 reason why a copy project might go sideways. It doesn’t happen often, but 99.99% of the time this is the reason) So what is that job? It is not to pander

Practical Tools for the Online Copywriter

Hey! Someone asked me recently about the tools I use in my copywriting, and while the task is really REALLY not about the tools, I thought why not, if it helps someone, here’s a shortlist. So here we go, in order of random brain shakerato:  Instapaper – You might think this is an odd o

Who doesn’t need more productivity in their daily routine? I don’t think I’ve ever met someone who said they’re completely happy with their productivity. Interesting as that is, all I want to do about that today is give you some free tools. Nasty, aren’t I? 🙂 So here

The Peace of Mind Formula for Marketers

Now what’s the most common dilemma I hear from my copywriting students? Is it that it’s hard to nail down a compelling story? Nope.  Is it that coming up with a curiosity generating headline is hard? Nope.  Is it that writing the close is difficult and feels icky, perhaps? Again, nope.

Jordan Peterson as Seen Through the Eyes of a Copywriter

So I saw the controversial psychologist and speaker Jordan Peterson last night, right here in the damp, dark but still beautiful Helsinki, Finland. 😉 He may be controversial, but he still filled an ice hockey arena seemingly effortlessly. Audience mostly 20-35 year old males, but there were the o

CarCast time! 😀 This one got sparked while on the road, fresh off the phone without some fellow coaches and mentors in the online business space. Press play and follow along: Comments? Sound off below or get in touch!   PS. If you’re interested in dramatically improving your copywritin

A little while ago I did a video about the Seven Cornerstones of An Effortless Lifestyle – and in it, I mentioned in passing that a balanced life MUST have three components in order to thrive and progress: Rest Activity Fun And a number of interesting conversations ensued. 🙂 So I’d li

Why I Love Air Video

If you don’t have an iPad, it’s probably no use reading on. If you still think the iPad holds no additional value whatsoever, on second thought, do read on. 🙂 Recently I’ve really grown to love a particular iPad app because it truly makes use of how the iPad is different. Here&#

Hey, folks! Long time no writey. So, it’s time for an update for my lovely peeps! Lately I’ve become enamored by this thing I call The Love Strategy. photo credit: laradana The Love Strategy is something that  you can use to really home in on: What you love in life What’s already

Honor the Law Of Exposure

Ever wonder how your life ended up the way it is now? Ever feel like ‘this is it’ and you couldn’t change the course of your life if you tried – at least not very significantly? Even sometimes feel helpless at times over ‘the forces at work’ in your life, making i

Why Be An Entrepreneur

entrepreneur entrepreneurship Juho Tunkelo Member since May 22, 2007 Loading + Follow Following Long time marketing strategist, superstar skills in copywriting and conversion optimization. Ring me up on Skype or send me a free-form email and I’ll lend you a keen ear. https://www.juhotunkelo.com Do

The Importance of Having an Inside Track

Howdy! If you’re reading this, you’re probably an entrepreneur, an ‘entrepreneur on the side’, or want to become one. Or at the very least interested in the entrepreneur’s life, I’m assuming. So anyway, here’s what I’ve found lately. Many people going

Another pretty satisfied Professional Identity Clearing client just sent this in. And wow… even though I know how well this works, -I– was blown away! To see exactly what he’s talking about, go and check it out here. At the current moment, this program is available until Midsummer

Hi guys, Here’s a kind of a follow-up to the video the other day. You’ve asked for more specifics, so I did another video that gives you that. Now, truth be told, there are more than one business model in the Effortless category. However, this one anyone can tackle strating with nothing,

Okay friends, it’s time for the final installment in the Three Pillars of Effortless Income series. This one is about the third and last pillar, Premium Income. And understandably, this is the one that always gets the most interest and the most attention. After all, we’re talking about s

Here’s something I come across alarmingly often in my dealings with online business owners. It’s a common mistake slash distortion field in mindset, especially when creating your very first information product. It’s actually easy to avoid too, but here’s what it is first: Cre

Measuring Your Marketing Vs… What Exactly?

Frankly, I’m sick of hearing it. “Why go by your gut when you can measure it?” Blah, blah, blah. It sounds like a flamboyant truism out of the mouth of an expert, but it does nobody any favors. Why? Two reasons why. 1. “Gut feeling” is NOT the opposite of measuring. Not

3 Ways to Ethically Spy On Your Audience Or Competition