We all know about the steely determination of Arnold Schwarzenegger.

We know how he turned his weaknesses into strengths; stoic, stiff and Austrian accent became the exact recipe for success with the Terminator movies

We know how he had a long term strategic plan to strike for office when the time was right. 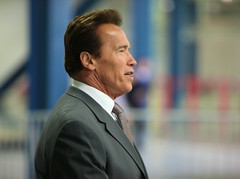 But do you know the secret of how he learned to sell his ideas to powerful people, and most of all sell himself as always the next big thing?

There’s one secret that has been rarely talked about.

While vacationing in Cyprus a couple of summers ago, I read an unauthorized biography of Arnold.

I didn’t particularly set out to dig dirt on the guy by reading an unauthorized bio, but sometimes the most interesting details emerge in those unauthorized ones.. go figure.

Unfortunately I no longer have that book, but here’s the gist of it.

Now, what would you do if you were an ambitious immigrant in the 1970’s, not having a big name yet, looking to get rich?

In today’s world, maybe he would go and sell his information through the internet, who knows.

Still, you may be thinking he had it easy being famous in the bodybuilding and fitness arena. But you know what, these were the 1970s. You couldn’t become a household name overnight like you can today.

So Schwarzenegger started a direct mail venture while still training at the Gold’s Gym in Venice. With the help of Joe Weider, the man who basically made bodybuilding into big business, he launched several information products.

At first, training manuals like “BUILDING THE LEGS OF AN OAK” or “BUILDING A CHEST LIKE A FORTRESS“. (Pretty nice use of mental imagery right there, huh?)

These under the name of Arnold Strong, when he wasn’t so well-known yet.

As I recall from the biography, the future governor really got into the mail order business with great gusto – perhaps realizing that he was not only making a lot of money, but also learning how to sell his information, ideas, and perhaps most importantly – himself.

So before the age of 30, he was already a self-made millionaire, entirely from his direct mail prowess and shrewd investments made from those proceeds.

Imbibed with the principles of selling anything direct, he then went on to be the Arnold we now know him as.

So when are you going to hunker down, dig deep, and discover the principles that build empires – just as well in the 21st century as they did in the 1970’s?

Juho Tunkelo Member since May 22, 2007
Loading + Follow Following
Long time marketing strategist, superstar skills in copywriting and conversion optimization. Ring me up on Skype or send me a free-form email and I’ll lend you a keen ear. https://www.juhotunkelo.com
Do you like Juho Tunkelo's articles? Follow on social!
Previous story :The Seven Habits Of Highly Effective Internet Marketers
Next story :Apple's Product Launch Mojo Deconstructed

One Product, One Chance, One Time

Heythere Friend! Consider the consequences of looking away VERY carefully. Because you’re looking at the most valuable bonus package available anywhere for Gideon Shalwick’s Rapid Video Blogging product. ( If you don’t have the foggiest what I’m talking about, click here: ) H

Fruugo – Cutting out the Middle Man?

As someone currently getting into the e-commerce game big time (actually, returning to it after a few years in between), I’ve been very glad to see a player like Fruugo come up on the scene. There’s been a lot of brouhaha lately about the up-and-coming Social Shopping Search Engine (hey,

For All Thy Getting…

“For all thy getting… get wisdom.” I forget who said the above but it must have been someone really important. 🙂 And it’s important not only because everyone needs to grow in wisdom, it’s also because of the ‘getting things’ part. Everyone is so focused o

The Mathematics of Being an Expert

Are you an expert, speaker or consultant? If you are, then you are probably spending the bulk of your time on the road, meeting customers. And there’s nothing wrong with that, I used to do that a LOT a few years ago. And still do, but not to the detriment of other things in my

Why Hire A Copywriter Who Knows What They’re Doing

Well, it had to be proven. Illustrated. Beaten to death. But there it is: proof that sales copy needs to be crafted knowing exactly what you’re doing… in what part of the world. After you scroll down to the end of this picture (and you’re not completely aghast 🙂 ) – read m

It happened again, and I couldn’t possibly let this one go by. Nokia just came out with yet another innovation that SHOULD be market making – and I do hope it will be –  if they just get the marketing right. Judging by the launch though, looks as though the huge promise is not get

How To Recognize A Real Expert

These days, everyone’s an expert, right? Everywhere you look, you’ll see someone claiming they’re an expert in something, even though it might just be a one hour a week hobby on the side. If you’re engaged in doing anything specific, you’re almost automatically an exper

7 Powerful Tests For Your Email Marketing

A lot of marketers seem to be doing one of two things right now: Copying formulas from other marketers without thinking: (“your account is approved!”, “bad news” and so on…)  Emailing completely without thinking – volume over quality (thinly disguised pitches

Friday Is The New Black

“NO – it does NOT have to be a race to the bottom!” Because when all everyone’s doing is cut deeper and deeper discounts… it’s a bloodbath. However… There IS a way to get more sales than with even the deepest of discounts. But first: Did you know why the word BLACK in Black

Why Exchanging Services Is A Bad Idea

Here’s a quickie video I recorded the other night. It’s about a mistake I almost made recently, twice 🙂 So I think it’s time I reminded both myself and you so you can dodge the bullet. Take it to heart, and godspeed to you! Cheers, Juho services trading Juho Tunkelo Member since

New Resources You Ought To Know And Use – November 2015

Hey-hey! Time for another quickie installment of resources I’ve come across lately, and couldn’t wait to share with you. They’re all very much worth your time, so you’re welcome. 😉 Marketing Stuff CodeDelay eliminate bounce traffic from ending up on retargeting lists ̵

How to Become an Entrepreneur, the Easy Way

Here’s a bunch of folks I’m just extremely impressed with. They call themselves the TEAM ACADEMY. I’ve gotten to know them at various events over the past couple of years, and I just couldn’t believe not only how great people they are, but also how they go about training youn

So, Facebook dropped the hammer on the clickbait artists. Read here if you haven’t yet. In short: this is a GOOD thing. To quote Facebook directly: “Click-baiting” is when a publisher posts a link with a headline that encourages people to click to see more, without telling them much in

How To Create Sustained Success

Here’s a Big Question for you to start the week with: What does your SUSTAINED SUCCESS depend on… in the long term? To put it short and sweet, it all comes from your inner STATE. You know, how you’re feeling, sensing, thinking… in a word, how you’re BEING. photo credit:

This one’s just for fun. A GREAT Lacoste ad by the people at AKAMA Studio. Reinventing the game of tennis, etc. etc. UPDATE: They blocked the embed option (WHY, for the love of…) so here’s the direct link instead. Cheers to Z-Generation for the tip. advertising lacoste tennis Trend

Written by Juho Tunkelo May 23, 2008June 6, 2008
Saving Bookmark this article Bookmarked
Next