Two days away from the 2010 Oscars, it’s clearly time to get into the appropriate spirit!

As I promised a few days ago, it’s time to break out the infallible formula to predict an Oscar winning movie.

A Best Picture Oscar winning movie, that is. It’s the catch-all and be-all as far as I’m concerned, and the one that gets the most notice and importance… so that’s what we’ll get into.

The Best Picture Oscar is the most interesting category of them all, and the hardest one to predict as it includes everything… so just one little thing going a little against the grain, and you lose it.

(We’ll see if the Hurt Locker controversy is one such thing, enough to throw off an otherwise deserving movie… let’s hope not.)

Now, it’s all too easy to be shallow and list all the things that supposedly make an Oscar bait movie:

So let’s not go there, it’s not what’s Really Going On. Let’s dig a little deeper than that. Here’s my list of three fundamental elements of a Best Picture winner movie:

1. THE ELEMENT OF TRUTH

This is the most important element of a Best Picture winner. The Academy recognizes, whether consciously or unconsciously, that the film to represent the best the film industry has to offer, has to have integrity, and Truth in it.

Usually the nominee with the most recognizable ‘Air of Truth’ will win out.

It doesn’t necessarily mean that the movie has to be based on a true story, although it often helps to imbibe the whole story with that unmistakable sense of the Truth.

This element is really where the writer shines. If the Truth isn’t already there in writing, it’s difficult if not impossible to insert it during production.

For a full explanation, check out this recent recent blog post on the Element of Truth.

2. NOT PRIMARILY A GENRE FILM

This is pretty obvious, but still very important in homing in on the eventual winner.

Comedies generally don’t win Best Picture. Neither do horror films. Nor do scifi or action films. Not even war films, unless they carry a very strong and important sentiment that help transcend the genre.

And it’s understandable; Academy members want to give recognition to the movies that stand out from everything they themselves do every day of the year. And so recognizing movies that ‘break the mold’ elevates the whole industry, or so it’s seen. A rising wave lifts all boats, and so on.

Even The Dark Knight couldn’t really overcome this principle, as excellent and deserving it would have otherwise been as a movie in its own right.

However, there IS an exception to the rule!

A comedy CAN win, but only when it’s not primarily a comedy or just for fun and giggles (e.g. Tootsie).

So even a genre film can stand a chance IF it introduces an important new theme, a new angle into something familiar, an unknown story… if it reveal something big that resonates with the human condition.

We’ll see if Avatar’s themes will be big enough to give it the nod. Even for the most profitable film in history, overcoming the ‘no genre films‘ principle will be tough.

3. EXPOSES A HUMAN FLAW (AND OFTEN TRIUMPHS OVER IT)

This is where the Oscar hopeful writer can only hope that the execution delivers, because it’s now all up to the execution. Will the director ‘get it and deliver it’, will the actors rise to the challenge, will it all click together as a whole?

The most memorable part of that winning movie will be some form of human drama the audience resonates with.

The movie that powerfully exposes a human flaw, and a compelling way to triumph over it, captures the hearts and minds of any cynical audience.

As Dustin Hoffman has said:

As a two-time Actor In A Leading Role winner, he would know. 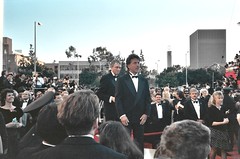 In fact, Dustin Hoffman’s stunning performance in Tootsie is the perfect example of exposing a human flaw and an innovative way to overcome it.

A Beautiful Mind is another great example of this. Russell Crowe is so good at flaw & triumph, Mel Gibson sometimes as well… even though he hasn’t quite hit it yet besides Braveheart. Daniel Day-Lewis is another flaw-exposing leading man.

Forrest Gump is another memorable winner that won due to this leading quality.

AND THE WINNER IS…

Out of the three principles, the one with the most Truth usually wins out. For instance, 1992’s Unforgiven won over fierce competition from Howards End, A Few Good Men, The Crying Men and Scent of A Woman.

The academy members are no dummies, they make films themselves and know what’s truly outstanding. (in fact, Outstanding Picture was the early unofficial moniker!)

A great performance alone, or great subject matter alone cannot make the ultimate Best Picture type of movie. But all these together, or at the very least 2 out of 3… and you’ve got the winner.

This year, Avatar and Hurt Locker will be very strong. Although Avatar will be suffering from the The Dark Knight syndrome and may therefore not completely clean up.

PS. Note to fellow Finns: If executed well, and accepted as a nominee, even Mannerheim could stand a fighting chance in 2012 (as a Best Foreign Film contestant, at the very least). On paper, Mannerheim hits an easy three out of three! So let’s give it a chance while they’re getting it off the ground, shall we? 😉

Juho Tunkelo Member since May 22, 2007
Loading + Follow Following
Long time marketing strategist, superstar skills in copywriting and conversion optimization. Ring me up on Skype or send me a free-form email and I’ll lend you a keen ear. https://www.juhotunkelo.com
Do you like Juho Tunkelo's articles? Follow on social!
Previous story :The Secret Sauce of Memorable Movies: Truth
Next story :The Underpants Gnomes Theory Of Marketing

Hey there. In the coming months, I aim to bump up my efforts to teach copywriting and other moneymaking fine arts to those interested in such things. As a small part of that, I’ve revitalized my monthly value newsletter in PDF form (this latest one is 33MB). Free of charge (for now). If you&#

It happened again, and I couldn’t possibly let this one go by. Nokia just came out with yet another innovation that SHOULD be market making – and I do hope it will be –  if they just get the marketing right. Judging by the launch though, looks as though the huge promise is not get

CarCast – Everything Is Copy

Some people think you only need high impact sales copy when releasing a new product. While true… that’s only ONE place where you can increase your results! What if you had dozens and dozens of ‘profit multiplier’ points of impact all over your business processes, all over you

So it happened again. With most demanding projects, it happens at some point. I’d done all the research, put together all the pieces, the sales arguments, the benefits, the hooks and the most appealing approaches… But then I hit a snag. Couldn’t get started with the actual writing. After 15+ y

Just in case you’re not yet a subscriber of my PDF newsletter The Copyist… Here’s a heads-up for you: The 2011 April Edition is now ready for download! (FREE of course) So go ahead and download your copy right now. The newsletter for people who like things that work In this issue y

This may take some explaining, but here we go. You’ve heard about that thing about how in email marketing, you should mix your selling emails with content emails, and do it consistently. 50/50%, 70/30% or even 80/20% in favor of content versus selling. Right? Well here’s the thing a lot

Here’s another rookie mistake beginning marketers do in their copywriting, it would almost be funny if the consequences weren’t so tragic. photo credit: JOCELYN, yo. This one’s about headlines. Or, let’s call it… “Do You Make These Mistakes With Your Headlines?

Are You Marketing With A Mask On?

Hey friend, Let me ask you something a tiny bit controversial today: What’s moving the big tides around the world? What created the Arab Spring? What’s animating the Occupy Wall Street protestors? What created the 2008 financial meltdown? What’s shaking the entire European economy

Hey! Well this one’s another one for the history books… New useful links, tools, articles, resources… all right smack dab in the middle of the coronavirus craziness that surely goes into the history books for a whole variety of reasons. Without further ado, here we go: Marketing &a

Written by Juho Tunkelo May 3, 2020May 3, 2020
Saving Bookmark this article Bookmarked

The Blog Is Everything – How’s Yours Doing?

You know this right? The blog is the center of the internet universe… The content revolves around it The linking and backlinking is run by it Even sales is largely happening around it now So how’s yours doing? If you’ve wanted to build out your blog for a long time but lacked the i

Written by Juho Tunkelo May 5, 2011May 5, 2011
Saving Bookmark this article Bookmarked

The Best Internet Marketing Report Of 2010

“Hello dere!” If you’re sick of all the ‘FREE’ and ‘BONUS’ and ‘PDF’ reports already clogging up your hard drive… you’re hardly alone. Truth is, most reports out there aren’t reporting much at all. Let alone give you something v

This one’s just for fun. A GREAT Lacoste ad by the people at AKAMA Studio. Reinventing the game of tennis, etc. etc. UPDATE: They blocked the embed option (WHY, for the love of…) so here’s the direct link instead. Cheers to Z-Generation for the tip. advertising lacoste tennis Trend

How To Trigger An Almost Compulsive Buying Habit In Your Customers

“Offers! Delicious Offers! Get them while they last!” -there’s a customer born every minute… Wouldn’t it be NICE? To not only get a dribble of sales here and there, or even some solid response to a campaign or launch you put out there once in a while… But to hav

Written by Juho Tunkelo May 3, 2017May 26, 2017
Saving Bookmark this article Bookmarked

The World According To Steve Jobs

So… I finally finished reading the mammoth, 571-page Steve Jobs biography by Walter Isaacson, former editor of Time magazine. photo credit: CLF It took me about two weeks and I’m already missing the experience (UPDATE: the blog post sat for an additional 4 weeks…). Talk about livin

For a restart of this site. Details to follow… Thanks, Juho Juho Tunkelo Member since May 22, 2007 Loading + Follow Following Long time marketing strategist, superstar skills in copywriting and conversion optimization. Ring me up on Skype or send me a free-form email and I’ll lend you a keen

Allow me to flog my favorite automotive fetish for a little while… one that hails all the way from the days my father got a Horch (before Audi was Audi) for their wedding… 😉 photo credit: jorbasa Audi used to be the ‘third German luxury car you can’t quite remember’&

Intake vs Ingestion vs Implementation

Here’s what was important in my link collection in March 2014. Enjoy!  So Helpful – helps your fans book a time with you VideoLEAN – use ready-made templates and clips to create function-driven video InVodo – another video platform for e-commerce etc. EasyExpire – crea

Leave a comment Cancel
Comments to: How To Predict An Oscar Winner