So it’s the end of the old, and beginning of the new again. Fittingly, I’m doing my best to clean the slate, catch up with my plans, and all that good stuff you’re supposed to do.

Part of that whole rigamarole is of course cleaning house… in my email inbox. 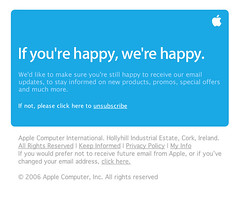 Hoo boy. I had no idea I was on so many mailing lists I had no idea I’d even joined. That often happens when people offer a list only for a bribe – people get it and then forget about you. But I’ll save that topic for another time…

Anyway. So while I was doing my end-of-year inbox cleaning – and wow did I find some gunk – I did come across one particular mailing list that was… well, a little different.

I did remember well how I’d gotten onto that particular marketer’s list. I was intrigued about the regularly useful content, the obviously talented marketer, and frequent mailings. I was a happy, attentive subscriber for quite some time.

In fact, I was so attentive that I’d started to eye a couple of this marketer’s products, thinking it’ll soon be time to join his customer file. Seemed like a good fit for what I do.

However… as time wore on, something nasty just stuck out like a rotten tomato on an otherwise delicious pasta plate.

For some unknown reason, at LEAST every other subject line – getting more and more frequent with every week that passed – included a decidedly negative word that rubbed me the wrong way. And not just negative, directly derisive of some people.

Now, I’m all for using divisive language to segment your audience and whatnot… but NOT at the expense of alienating subscribers that could otherwise become customers.

Sure, there is the brand of marketer that says ‘I don’t give a rat’s ass what people think, I do my thing and if people like it fine’. But given the choice of making money or sticking to that odd maxim… I bet every single one of them would take the money.

So. There I was, being tugged into two directions: wanting to get more involved and possible buy a product or two – and being constantly annoyed and really rubbed the wrong way by the same marketer’s choice of attitude.

And to be clear – this guy’s a pro’s pro, no beginner by any means.

In the end, “when there’s doubt, there’s no doubt” – I unsubscribed. 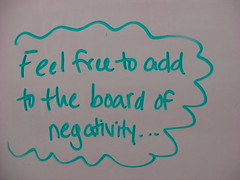 Now, it IS possible that:

However, given the fact that I actually WANTED to BUY from this guy, does it even matter?

In reality, he pushed away a fully potential customer. Don’t be like that guy.

Be the one who DELIGHTS the subscriber, making them WANT to hear from you instead of dreading the next mailing.

THAT is the REAL purpose for your existence in your subscriber’s inbox. Some way, somehow, you make their life better. That’s the reason why you have an audience. Period. End of story.

If you didn’t catch the 2010 Holiday Edition of my PDF newsletter The Copyist, not to worry. You can still check it out right over here. Enjoy!

Measuring Your Marketing Vs… What Exactly?

Frankly, I’m sick of hearing it. “Why go by your gut when you can measure it?” Blah, blah, blah. It sounds like a flamboyant truism out of the mouth of an expert, but it does nobody any favors. Why? Two reasons why. 1. “Gut feeling” is NOT the opposite of measuring. Not

One of the most surprising things to learn in marketing is… PATIENCE. And if you know me as the direct response guy always gunning for the response, gunning for the sale… that may not compute immediately. But when you dig a little deeper into any successful business endeavor, things star

A few short years ago, I had the distinctive honor to work with someone in the high fashion industry, and as brief as it was it was one of the most interesting experiences I ever had. I was fortunate to gain insights into the fashion industry, confirming some preconceptions (yes, very insular commun

How my refreshing dip into a cold, cold sea relates to you taking some bold steps in your marketing… Well, just keep watching… 🙂 I may not post every one of my videos here so if you want to keep up, make sure you’ve subscribed to my YouTube channel! Or heck, even Vimeo if you

How to Choose Your Next Project

Like so many entrepreneurs, I face this insidious problem from time to time. With so many ideas and prospective projects floating around, which one could I possibly choose over others, and why? I’ve wrestled with this quite a bit over the years, and while there’s a lot to admire in the H

How to Create a Miracle Today

Okay. So it’s supposed to be gloomy times now. You can’t really escape all the doomsday talk, no matter how hard you try. And still, it’s hardly the only game in town… in fact, not by a long shot! A couple of days ago, I made a little video to talk about it (it’s short,

Making Mistakes is Human, However…

…just don’t make it a way of life. A few years ago I worked at this consultancy where the first thing they gave me was this big ass eraser that said “For Really Big Mistakes”. A really nice sentiment, indicating that experimenting is now okay, and even making mistakes…

I hear it from time to time. That copywriting doesn’t really matter anymore, that it’s an antiquated approach to marketing or something. That all you need these days is a Facebook account and a YouTube account, and you’re ready to go. Well, if that were true there wouldn’t re

I get asked about this question so often it’s time to come up with an answer: If you were to start copywriting today, which books would you get and devour first?  The answer is not simple, there are so many great ones including all the classics. But I think this list covers a practical array

Three Ways to Leverage in the Online Business

Another topic that comes up a lot. Actually, it should, but only those entrepreneurs perceptive enough to ask the right question will ever solve this riddle. Here’s the question: How do I ensure I have enough leverage in my online business in order to make a decent living in my online business

CarCast: Don’t Get Angry – Get Better!

CarCast time! 🙂 So… once upon a time, there was a time when people would get angry when they saw someone succeeding at a higher level than them. Luckily this is now a thing of the past. Or is it…? 😀 Enjoy! Wanna sound off? Leave a comment! consulting copywriting directresponse ecommerc

What Is Even More Important Than Conversion?

Press play and find out! So to recap: PRODUCTIZATION CONVERSION RETENTION …in no order of particular importance, HOWEVER… Product tends to be the overlooked one, believe it or not. In truth, you need all three. Which one are you overlooking the most? Sound off below! conversion productiz

Word to the Wise #02: Businesses and Business Models Thriving… Even Now!

So here’s another one in a series of videos I’m doing to support and share… with fellow entrepreneurs, in this strange time that requires high alertness from all of us. Let’s GO!    Sparked a thought or two? Leave a comment below will ya! 🙂 And if you’re intere

Conversion Fundamentals For A Measly 99 Cents

Hey there, Keeping it short here – I’m giving you a deep discount on my book Universals of Conversion. I was going to make it free for a time but due to Amazon policies and whatnot, the best I can do it take it all the way down to $0.99. So go and get your

The Smartest Use Of A Vanity App

Hey! You know those celebrity iPhone apps, usually hastily thrown together just to have a point of entry in the Apple App Store for the fans to find on their own? Usually they look like very little thought into the design of the app, and even less into what is the intended business purpose of

Outrageous Marketing Works… Up To A Point

It is true that having a bit of an outrageous angle to your marketing can work wonders in getting attention. It can make you stand out from a sea of me-too marketing, lukewarm offers and overcrowded markets. However, too much of a good thing can be detrimental too. Take this Lithuanian ad for a mine