This morning, I did my usual coffee routine:

Done! Every step done to perfection. Yet another morning started on a positive note. 🙂 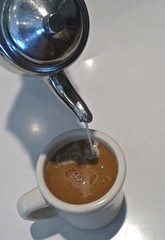 Except… one step in this process is still seriously lacking, and it’s bringing down the whole of it. As much as I’d like to tell myself it’s perfect.

I’ll tell you which step that is in a minute.

First, let me illustrate why this is not only amusing but important to anyone selling anything.

Just the other day I critiqued an online sales letter. Yet another information product about selling information through Clickbank… the subject was hum ho but the content and the product was actually good – so far so good.

But the problem with the sales letter was… it started from nowhere. Or so it seemed, because it was skipping steps all over the place. It was almost as if it was the last part of a launch that went straight into selling the product. Except there was no launch, just this sales letter.

No backstory, no discovery, no rags-to-riches or before & after… No overcoming objections, and no proof elements outside of the product owners (which were convincing but still).

Every story has a beginning, a middle and an end. Every movie goes through setup, confrontation and resolution. Every single human life goes through these phases. That’s why we identify with this structure so deeply, and actually SEEK TO FIND IT everywhere we go in our experience.

So why would you want to skip all that good stuff and go straight to the end in your marketing? Straight to old age before experiencing the joys of young age and adulthood, so to speak? Straight to the packaged product before you’ve even established there’s a problem and a solution?

Paying ATTENTION to every step… just so counts in marketing. If you see a product launch that didn’t do so well, they probably skipped a step or two, or just didn’t put enough attention on some of them.

Now – which part of my near-anally-meticulous coffee-making routine is still tragically lacking, you ask?

Why, the darn plastic cone of course! Whether you like the idea or not, any liquid you consume out of a plastic container likely has been in it for a LONG time and will have residue from it as you consume. Even more so with hot water.

I’ll take copper, glass or even steel over plastic, any day of the week. 😀

But here’s the important part: Every time I improved every step in my coffee-making process, the coffee started tasting just that much better.

It all adds up to an overall effect that is VERY noticeable IN TOTAL. 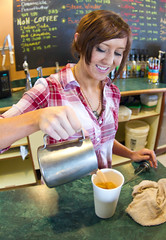 The very same principle applies to your marketing: every step counts. So resist the temptation to plunge headlong into ‘hype and glory’ like the guy I critiqued (don’t worry though, he’s got it now).

Instead, use the tried & tested, age-old technique of telling a story, without leaving out a single step or a single compelling detail…

And with your meticulously crafted process, triangulate your prospect until they’ve backed into a mental corner and have no option but to buy from you.

If you don’t yet know how to do that, perhaps I know someone who does. 😉

Juho Tunkelo Member since May 22, 2007
Loading + Follow Following
Long time marketing strategist, superstar skills in copywriting and conversion optimization. Ring me up on Skype or send me a free-form email and I’ll lend you a keen ear. https://www.juhotunkelo.com
Do you like Juho Tunkelo's articles? Follow on social!
Previous story :The Copyist Newsletter - 2010 Holiday Edition
Next story :Positive Notes For 2011 (Literally)

Why I Love Air Video

If you don’t have an iPad, it’s probably no use reading on. If you still think the iPad holds no additional value whatsoever, on second thought, do read on. 🙂 Recently I’ve really grown to love a particular iPad app because it truly makes use of how the iPad is different. Here&#

CarCast: The One With The Hat

I haven’t done a CarCast all summer so it’s time. I’ll tell you what I’ve been up to, how to make sure the people around you respect your need for privacy, my new projects and more. Press play and see my stylish new look! 😉 Last legs of the summer, so let’s keep goin

Conversion Fundamentals For A Measly 99 Cents

Hey there, Keeping it short here – I’m giving you a deep discount on my book Universals of Conversion. I was going to make it free for a time but due to Amazon policies and whatnot, the best I can do it take it all the way down to $0.99. So go and get your

How to Write Copy That Converts… Even Unconsciously!

You know what… against my usual own advice, I’m not going to do a hard sell on this recording. Not this time. Because if this table of contents doesn’t convince you… you probably shouldn’t even be sold this recording. Sorry if that sounds a little harsh… it’

Hey! It’s been a few weeks now, but I wanted to relay a few things from the Venice Marketing Summit for you guys to munch on. I have to say, the quality of information presented actually exceeded my expectations, and that doesn’t happen often. That’s all folks. See you at the next

Why Market With the End in Mind?

Time for a quick carcast, this time a quickie audio explaining something pretty important. Take my word for it – if you start a new campaign, a new promotion, whatever it is… with the end in mind, the entire project will take on that particular quality. Which in turn greatly increases th

I’ve said it a few times before, and I’ll say it again: if you want to see where the masses are going, keep a keen eye on the fashion industry. Because they not only define the trends, they also tend to pick up on trends affecting their business much faster than many others. Case in

How to Create a Hypnotic Video, Part II

Part II of How to Create a Hypnotic Video Online!

A Revolution Brewing in Information Delivery

Just the other day, I was talking about this with some Internet Marketing friends. It seems there is a rather large revolution brewing concerning th delivery of information products online. Or at the very least, a very large opportunity. As you probably know, it’s getting harder and harder to

One of the most surprising things to learn in marketing is… PATIENCE. And if you know me as the direct response guy always gunning for the response, gunning for the sale… that may not compute immediately. But when you dig a little deeper into any successful business endeavor, things star

Factual and Common Sense? How Dare You!

The other day I got the weirdest testimonial (well, it read like a complaint but anyway) for any of my products so far. It went something like this: “I was disappointed. It was factual and common sense. Not at all what I expected.” He did NOT ask for a refund though. Go figure. I suspect

How to Create a Miracle Today

Okay. So it’s supposed to be gloomy times now. You can’t really escape all the doomsday talk, no matter how hard you try. And still, it’s hardly the only game in town… in fact, not by a long shot! A couple of days ago, I made a little video to talk about it (it’s short,

One of the biggest mistakes I generally see in marketing newcomers’ copy is giving the impression of neediness. If you’ve ever been approached by the opposite sex… ever… you know how big a turnoff it can be. 😉 And in sales copy, this can happen in so many ways. Here’

Carcast: Got a Mental Model of Your Ideal Client?

So what’s the deep… deep… DEEP undercover way to “get to your customer”? To almost read their mind, and have them know that we have their dream solution? ‘ Well, deep mental modeling is where it’s at! Have you created yours yet…? Stirred some thoughts?

With A Great Brand, Do You Still Need Copywriting?

Hi there, I’ve had this discussion a few times lately, and I wanted to bring the results to you. “Do I Really Need Copywriting… When I Have Such A Great Brand?” I certainly understand where this comes from. When you have a great brand, you have demand, things are happening, b

Copywriting Is Engineering (In A Way)

I’ve seen people mistake copywriting for prose. They go on and on and on… without a single thought to how excruciating it is to read. Others mistake copy for carnival barker hype. They cram every sentence full of inappropriate adjectives that only distract from what’s being sold. Others yet tr

Hey! Humor is a pretty edgy but dangerous thing to use in advertising… or is it? I wanted to share something I saw while I was in London recently. Press play and check it out… advertising britain copywriting humor london marketing Juho Tunkelo Member since May 22, 2007 Loading + Follow F

As an eternal fan of the Lazy Way to Success… I couldn’t possibly pass this by. A relaxed, unhurried approach to life and business being central to ALL success, having a place to deliberately do so is paramount. Or so we all like to tell ourselves. 😉 Here in Finland, sauna is the usua

Do You Have a Success Compass?

The unfortunate thing about being a frontrunner… is that you sometimes get derided for it. It goes with the territory, you know. Like when the movie The Secret came out three years ago, there was just all manner of attacks going around. Against the movie, against its message, against the very

Show comments Hide comments
Comments to: Every Step Matters – In Life and In Marketing