This is another discussion I get into every now and then… and to think, just a couple of years ago, I was on the opposite end of the argument! I believe the derogatory term is ‘Apple Fan Boy’… 🙂

But in reality, THIS is why I’ve grown to prefer Apple products in my work – and a lot in my free time, too:

1. They get out of the way. Out of the way of doing the meaningful stuff. The iPad is perhaps the most remarkable in this regard. you just focus on the content, whatever you’re doing, creating or consuming, and the content or the application just becomes what you’re immersed in. Not generally my experience with other systems that expect you to learn them first.

2. They don’t get old. Not as fast as competing products, anyway. This has been perhaps the greatest surprise. Oh sure, Apple does come up with upgrades and new shiny objects at a head-spinning rate, but that’s a different matter altogether.

My Macbook Pro works just as well as it did when I got it a year+ ago. no noticeable slowdowns or such. even after fairly big system upgrades and such. just keeps on truckin’.

3. They speed things up. The Mac never freezes, never crashes, almost never hangs. it has sped up getting things done manifold for me. The iPod/iPhone apps allow me to record brainstorms, take notes, and how many other things that used to require me to lug around a laptop.

I haven’t done the exact math to compare, but I do know for a fact I churn out much more finished work after making the switch.

But, Dude – aren’t you just rationalizing the use of the coolest toys?

Nice try, but no cigar. I’m not that easily fooled. No sirree. 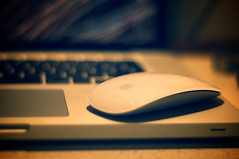 It took me YEARS to take the plunge. I know ALL the excuses (I’m too used to Windows, they’re too expensive, who cares about trends…).

In the end it’s just about using what works best and gets you the best results, the easiest. Period.

Oh sure, Apple products ARE beautiful to look at, fun to use, easy to upgrade, and all that… BUT if they wouldn’t come with those three main benefits, I wouldn’t dream of using them for anything meaningful.

Oddly enough, the only Microsoft product in significant use in my household now is the X-Box. seeing as Nokia is now in bed with them though, that may change in the future… but until then, Apple has my attention.

I’ve written about this before, and it’s this. As a product creator, FOCUS ON THE OVERT BENEFITS your users/clients/customers REALLY want. Not that perfect spec sheet or shiny me-too user interface, necessarily. It’s a plus, but not ultimately important to your customer.

Basically people just want to get things done, and feel good about it while they’re doing it. End of story.

Juho Tunkelo Member since May 22, 2007
Loading + Follow Following
Long time marketing strategist, superstar skills in copywriting and conversion optimization. Ring me up on Skype or send me a free-form email and I’ll lend you a keen ear. https://www.juhotunkelo.com
Do you like Juho Tunkelo's articles? Follow on social!
Previous story :Three Ways to Leverage in the Online Business
Next story :Paypal Lifts The Skirt - Marketers Benefit

Hey friends, If you’re on my mailing lists, you’ve probably already seen I recently published my first Amazon Kindle ebook. It’s a brainchild of my years of experience in the trenches of Conversion Optimization for e-commerce and online businesses of all kinds. So if you’re j

Okay fellas… Here’s something I whipped up while in the car in the morning. So please do excuse me the vertical frame syndrome, I swear this will be the last time this happens. 😉 So… Engagement is the big deal here, and if you didn’t get a clear idea about it from this vid

Dreams Without A Foundation (Imagine That)

Have you ever been excited about something new, maybe a new business opportunity or a career you wanted to get into? Or maybe even some of those lifestyle type things: a house you saw and would love to live in – or maybe that sports car you imagine yourself in, driving off to the sunset?

Hot off the presses

Hot off the presses Originally uploaded by jtunkelo A hard copy of ‘40 Miracles‘ coming up… possibly. Might go for a round of edits first. If you want a copy, do leave a comment. effortless success hard copy juho tunkelo miracles Juho Tunkelo Member since May 22, 2007 Loading + Fol

3 Ways You Can Make Anything Sell Better

It’s an easy mistake to make. Hear a strange story of what happened to me at a gas station, that illustrates this phenomenon… Need to move along fast in your marketing? Check out my current offerings. carcast customer video Juho Tunkelo Member since May 22, 2007 Loading + Follow Followin

CarCast time! 😀 This one got sparked while on the road, fresh off the phone without some fellow coaches and mentors in the online business space. Press play and follow along: Comments? Sound off below or get in touch!   PS. If you’re interested in dramatically improving your copywritin

The Phantom of Writer’s Block: What It Really Is…

I LOVE to research. I LOVE to write. I LOVE to style and deliver the final piece. But I LOATHE… to start writing. That’s my cryptonite. And so it is for many writers out there who THINK they have writer’s block. I lot of people think they’re blocked but they just haven’t ST

Hey! So how’ve you been anyway? Wild times huh.  I just put together this video for you, in which I’ll have a few words with you about how this situation relates to marketing. And then I’ll give way to one of my Copywriting protegés, Martti. So you’ll hear a little bit abou

Howdy y’all! Yes, my return to podcasting is feeling a little bumpy and I apologize for the delays and frankly still not so polished output. Having said that, I thank you for the kind remarks I’ve had about the episodes so far, I’m glad it’s making sense for you and helping y

Here’s a list of apps I actually use, if not daily, on a continuous basis to run my business and life. These are all Apple app store links, so click away to get yours. ORGANIZATION Trello for keeping track of projects, todos and goals  Evernote for storing and managing masses of text based no

CarCast: The One With The Hat

I haven’t done a CarCast all summer so it’s time. I’ll tell you what I’ve been up to, how to make sure the people around you respect your need for privacy, my new projects and more. Press play and see my stylish new look! 😉 Last legs of the summer, so let’s keep goin

It’s now a week before the Oscars, so some movie talk is in order. I will be releasing my formula for picking an Oscar winner, but first… let’s get to the truth of the matter, so to speak. As elusive as it is to try and find ONE quality over others that makes a good

Why Go Into Business For Yourself?

People sometimes ask me why I chose to go into business for myself. My 10-year anniversary as an entrepreneur (with a couple of stints as a salaried professional thrown in, but still) is getting close, so why not give some answers. To me these are more or less no-brainers, but I understand the sen

So here’s another one in a series of videos I’m doing to support and share… with fellow entrepreneurs, in this strange time that requires high alertness from all of us. Let’s see what’s next…  Sparked a thought or two? Leave a comment below will ya! 🙂 PS. I

How to Use Social Feeds for Productivity

Hey! I did a quick video for you, showing you how you can use the RSS feeds present in almost all social media platforms and services, to make better use of them (social mining, I call it). Also you’ll save tons of time when you don’t have to constantly log in to different services. So

I was recently asked by a first time entrepreneur about the apps I use for business. As in, the ones that actually add to productivity instead of eating up precious profit-generating time. This list is for Apple iOS devices only, but many of these are also available on Android. So go Play, andro

Links That Mattered In February 2020

Hey! Another installment of new, useful or just plain cool resources from around the interwebs. Easy as pumpkin pie. Without further ado, here we go: Marketing Sales pages and humor – do they mix? Sometimes they do… Want to succeed as an affiliate? – Turns out Marlon Sanders is STI

The other day, I had participated in a fascinating discussion about the state of bands and artists these days. Specifically, about how the business model is unmistakeably transitioning from selling records to selling something else (and nobody seems to know what, exactly). T-shirts, concerts, whatev

And now, for something completely different… It’s time for the next installment in our series of timely industry analysis (see previous piece on the music industry). The Golden Globes have been distributed, and everyone’s waiting on the Oscars for the next few weeks. So what better

Show comments Hide comments
Comments to: Why I Use Apple Products (Ya, Me Too!)