You know when you’re shopping for something of higher value, like a car, and the salesperson just keeps pushing at you towards a deal, eventually you’ll blurt out something like…

Let me just think about it for a day… I’ll get back to you.

At which point both of you KNOW it’s just a polite way of saying no, and it’ll never ever happen.

And both of you also know that it’s another chance for the salesperson to butt in a day later and try to close you again… and maybe they will, maybe the won’t, depending on their skill and your resolve. 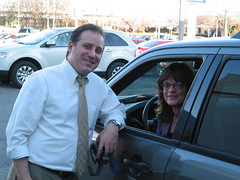 The point is… the chance to get a win-win deal is just about gone there, and maybe the chance wasn’t there to begin with, who knows.

HOWEVER… if you’re on the selling end of the equation, this is a situation you should never arrive at.

I’ll tell you why.

That dreaded response ‘Let me just think about it…’ reveals that they really just didn’t understand the offer.

They’re not saying yes, they’re not saying no, and not really arguing the merits of the offer or the product. Maybe throwing in some arbitrary question or doubt, but no real conversation that could end up somewhere.

And that says one thing only: the prospective customer didn’t get enough information.

That’s why long form sales letters and long-winded sales videos STILL WORK like nothing else.

Especially when it comes to selling something of a high value – real or perceived, tangible or intangible.

The prospect NEEDS to go through the whole story – why this product, why now, how it relates to their situation, why it’s better than the competition, how it’ll improve their lives starting today… ALL of it.

Because when they get the WHOLE story, they have something to base a decision on. Either it’s targeted to them and it works like a champ, or it’s not and they wouldn’t buy anyway.

Or it’s just not the right time, but they’ll come back when it is, now that they KNOW they want what you’re selling.

But if you’d just left them hanging with a take-it-or-leave-it, both would have walked away with a sinking feeling. And that’s just too much of a shame. You know better. They deserve better.

So the next time you’re offering a new coaching program, a new info product, some new service you’re launching… tell it all. Give them the whole story, because that gives them the ability to make a decision. Then all you need to do is to give that final nudge, if that.

Juho Tunkelo Member since May 22, 2007
Loading + Follow Following
Long time marketing strategist, superstar skills in copywriting and conversion optimization. Ring me up on Skype or send me a free-form email and I’ll lend you a keen ear. https://www.juhotunkelo.com
Do you like Juho Tunkelo's articles? Follow on social!
Previous story :How To Create A 'Greased Lightning' Squeeze Page
Next story :The 7 Cornerstones Of An Effortless Lifestyle

Hey! Here’s something that came to mind as I was spending most of the day darting around in the car… You don’t need to be clever or creative to be effective in marketing… but you do need a measure of discipline. I’ll explain… 🙂 If you haven’t subscribed to my

A Web Poster… Of Course!

It’s been a long time since I’ve seen something truly innovative in online promotion. I mean, of course there’s little twists here and there every day in the processes we all know and use, but a long time since anything made me go… aaaah, okay! And it doesn’t have to be

Hi!  I’ve been running some content marketing experiments lately, and thought you might like to hear about some findings. And who knows, oh I don’t know, get the same results yourself? So here are some observations / results from some experiments of late: Personal, talking head videos

For All Thy Getting…

“For all thy getting… get wisdom.” I forget who said the above but it must have been someone really important. 🙂 And it’s important not only because everyone needs to grow in wisdom, it’s also because of the ‘getting things’ part. Everyone is so focused o

The Three Pillars of Effortless Income

(If you’re a long time reader, this may be familiar to you. Still; hang on, there’s something new and newsworthy to follow!) I’ve long been a proponent of Effortless Income; in other words, models of making money without selling your time, energy and soul. About 1.5 years ago I did

Why An Irresistible Offer Matters the Most

Would you opt-in to this simple offer?  If you don’t out-and-out loathe Apple products… chances are, you would. And did. I certainly did. 🙂 I have no difficulty admitting this simple opt-in form had a great effect on me. Sure, I like and use Apple products and I’m well aware

Getting Conversions With Video

A little while ago, I attended this fine video marketing event. This stirred some thoughts beyond your average review… well, I’ll leave it at that. 🙂 Whatchoo think? Don’t be shy, leave a comment! conversion video Juho Tunkelo Member since May 22, 2007 Loading + Follow Following

How To Make Sure You Actually Make Any Sales

Hey there! Seeing as you’re reading my blog, I’m going to assume you’re doing something online that involves selling something. Fair enough? And selling that something involves having a ‘sales piece’ of some kind: A traditional sales letter A video script A series of em

So this thing comes up with my private clients every once in a while. Well, more like clockwork. Just a matter of time before it creeps up. 🙂 They press me and press me for whatever might be THE most powerful sales generating thing RIGHT NOW on the interwebs. That ONE THING that makes everything

Or something… Juho Tunkelo Member since May 22, 2007 Loading + Follow Following Long time marketing strategist, superstar skills in copywriting and conversion optimization. Ring me up on Skype or send me a free-form email and I’ll lend you a keen ear. https://www.juhotunkelo.com Do you like

Just in case you’re not yet a subscriber of my PDF newsletter The Copyist… Here’s a heads-up for you: The 2011 April Edition is now ready for download! (FREE of course) So go ahead and download your copy right now. The newsletter for people who like things that work In this issue y

Every Step Matters – In Life and In Marketing

This morning, I did my usual coffee routine: Check the water that’s been purifying overnight, set it on course to boiling point Get out some organic ground French roast Put a couple of spoonfuls of the stuff into an organic, recyclable sleeve Place the sleeve into a self-standing, plastic cone

So what’s different about social copy, if anything? I’ve had some excellent Social Copy workshops for private clients lately, more on this soon! Sparked a thought? Leave a comment below! Juho Tunkelo Member since May 22, 2007 Loading + Follow Following Long time marketing strategist, sup

I hear it from time to time. That copywriting doesn’t really matter anymore, that it’s an antiquated approach to marketing or something. That all you need these days is a Facebook account and a YouTube account, and you’re ready to go. Well, if that were true there wouldn’t re

Here’s a list of apps I actually use, if not daily, on a continuous basis to run my business and life. These are all Apple app store links, so click away to get yours. ORGANIZATION Trello for keeping track of projects, todos and goals  Evernote for storing and managing masses of text based no

Show comments Hide comments
Comments to: ‘Let Me Just Think About It Overnight…’