There’s something very destructive at work in the minds of most aspiring entrepreneurs. And even some moderately successful ones (not as much the REALLYsuccessful business owners).

And that is the THE MYTH OF MARKET SHARE.

You know, the enthusiastic brand new CEO standing proudly in front of a panel of VC’s, presenting his company’s outlook…

Going over slide after slide of market analytics and numebers… until THAT moment comes.

“The market is worth $4 billion, so conservatively speaking… if we ONLY grab 1% of that market, we’ll be looking at $4 million in revenue, just for starters. But in reality our plan is so great, we could end up with 10% or even 40%, and that means…”

At which point the VCs’ ears have long been shut and the game is lost before it even begun.

Because the investors know full well that the whole idea of ‘market share’ is flawed. It doesn’t mean anything.

No company gets ‘their share of the pie’. Everybody makes their own pie!

photo credit: me and the sysop

But that’s not the only reason why this whole myth of ‘market share’ is so destructive, flawed and just plain wrong.

It is even more destructive in the hands of companies who simultaneously try to grow, and buy into this myth.

And that is because they believe that everyone else in the market is their enemy, and they must do everything to ‘beat them’, even stop them from succeeding. That any headway others make, it’s somehow detrimental to their own business, ‘out of their quota’.

It makes no sense, and doesn’t hold to ANY closer scrutiny.

Let’s say you’re an importer of goods, and you import widgets from China, and sell to 5 retailers in your own country.

Then a competitor comes along, imports a similar ‘competing’ widget from China, and sells to 5 other retailers in the country.

How did that diminish your original business? It didn’t. It’s only in your mind that you feel the pressure of someone else being in ‘your’ territory.

Get over it, it’s NOT ‘yours’. It’s all about the customers.

THEY get to dictate the truth of the marketplace. 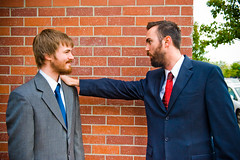 But that’s still not all – here’s perhaps the most destructive aspect.

The amount of new business you’d be losing by working against these perceived competitors could be robbing you out of the growth you say you’re after. It’s very much possible, even likely that by working together, you could both grow even faster.

But if you view them as your enemy, often they both end up destroying each other, and in the end the customer loses.

Actually, that’s not 100% correct. The customer will always find the best solution available. They don’t care about any petty territory disputes. They just want their problems solved.

So get that idea of ‘market share’ out of your head, start working FOR your customers, and WITH your peers (as opposed to competitors).

I guarantee you your bottom line will quickly prove to you just how superior that route is.

Juho Tunkelo Member since May 22, 2007
Loading + Follow Following
Long time marketing strategist, superstar skills in copywriting and conversion optimization. Ring me up on Skype or send me a free-form email and I’ll lend you a keen ear. https://www.juhotunkelo.com
Do you like Juho Tunkelo's articles? Follow on social!
Previous story :My Home Office in 3 Minutes
Next story :A Hammock Update

So, Facebook dropped the hammer on the clickbait artists. Read here if you haven’t yet. In short: this is a GOOD thing. To quote Facebook directly: “Click-baiting” is when a publisher posts a link with a headline that encourages people to click to see more, without telling them much in

Getting Conversions With Video

A little while ago, I attended this fine video marketing event. This stirred some thoughts beyond your average review… well, I’ll leave it at that. 🙂 Whatchoo think? Don’t be shy, leave a comment! conversion video Juho Tunkelo Member since May 22, 2007 Loading + Follow Following

Hey folks! Yet another sudden brainstorm while darting around in my car… so naturally I turned the camera on. 🙂 So what do you think? Does your content exhibit the 3 components I laid out for you in this video? PS. If you need tips for getting your content and marketing to be effective, I&#

How to Improve Payment Conversion

Morning! Improving sales conversion is one thing, but improving payment conversion is often overlooked. So here’s a quick One-Two punch of a tip for you, on this topic. Go get your customers over that final hurdle: conversion online optimization payment sales Juho Tunkelo Member since May 22,

10 Different Ways to Use Conversion Optimization to Increase Sales

Invisible Marketing That Generates More Cashflow… Than Anything

Invisible marketing… yes, I’m dead serious. And so are my clients who have experienced this first hand. To get a clue on what the key might be… look for a keyword within this video… it starts with an ‘L’…  Right? Pretty cool, or what?! If you want to REALLY

A few short years ago, I had the distinctive honor to work with someone in the high fashion industry, and as brief as it was it was one of the most interesting experiences I ever had. I was fortunate to gain insights into the fashion industry, confirming some preconceptions (yes, very insular commun

SO…. You track your stats, right? Who’s coming in, who’s going out and why, all that kind of stuff. But what do you actually DO with all that data? Is it paying off for your bottom line? Is it REALLY? Do you use it to develop your site to perform better, to know your customers

Hey! Another installment of new, useful or just plain cool resources from around the webs. I don’t know how long I’ll keep doing this free service for you, but enjoy while it’s there! So here you go, gifts from my keyboard. Cheers, Juho   Marketing & More Fro Knows Photo G

Why Product Launches Work So Well

Everybody loves a great product launch, right? At least when it’s their own… 😉 But WHY is it that they work so well? I mean, they’ve been declared dead so many times, and yet we see successful launches all the time. Here’s one way to look at it. Product launches put tog

How to Get A Super Affiliate to Promote for You? Here’s How

So, my friend! If you’re in the position of having a list, you have an audience, and a voice, and some semblance of success… You’re going to be approached for JV’s, affiliate promotions and product launches all the time. So here’s the 5-part formula for you: Make It Easy For Me Create

Well… inasmuch as he is ever unplugged… Now, I don’t know if you caught this little announcement or if it even matters a thing to you: However… what what matters to me is that you go and watch Frank Kern expouse his particular brand of marketing meets lifestyle meets motivati

Know Someone Confused? Here’s How You Can Help!

You know the type: trying a new form of exercise every two months, taking up a new hobby at least twice a year, starting a new ‘business’ that never really goes anywhere… The old ‘I’ll-try-anything-because-something-must-work‘ approach. Maybe you know someone like

Written by Juho Tunkelo May 6, 2011May 6, 2011
Saving Bookmark this article Bookmarked

The Creative Credo: Please Yourself First

For all you people-pleasing content creators of all caste and ilk… Hear me now: Please yourself first. Please, please.. bypass all that doubt, mental programming and routine… Please yourself before others.. I insist! Why? Haven’t we all been taught to think of the audience first? O

Win Everything With The Immersion Method

Here’s perhaps my biggest personal piece of discovery from 2016. Once I discovered how this one key worked to drastically improve one area of my life, I used it to heal and improve several other areas. So I’ll definitely continue to apply it in 2017. What am I talking about, again? Oh,

All Roads Lead To The iPad…

Just in time before the iPad 3 rumor mill reaches fever pitch… let’s take a look at something practical. Something that works regardless of your iPad version. This quickie post points to two trends unlikely to quiet down any time soon: Content delivered and consumed via tablets; i.e. iPa

Hey you! Here’s yet another episode of the CopyCast, picking up steam again. This one’s about one of my favorite subjects in all of copywriting: writing effective bullets. It doesn’t matter whether you’re doing a sales letter, newspaper copy, radio, tv… not to mention o